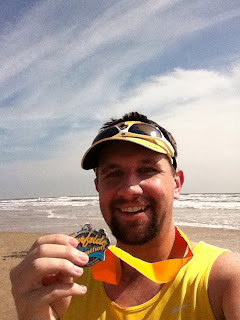 This race was surprisingly hard on several levels. I prepared for this race thinking that I would be running on sand. In my mind I was thinking of running on soft, squishy moveable sand. Surfside Beach was not that kind of beach. Instead the surface of the beach was like running on clay. Every step was difficult since my foot never landed on an even surface. Step after step was placed on the uneven surface formed by waves. It was kind of like running on older sidewalks that had shifted. Every step had to be intentionally placed.

It was also a difficult race mentally. Ideally one would think that 26.2 miles would be a relaxing run next to the sight and sound of waves crashing along the gulf shore. It was a beautiful and peaceful run for the first 10 miles. After the first ten miles it began to feel a bit monotonous. My past races have all been either through cities, around a park or through theme parks. This race was a giant hairpin. There and back. 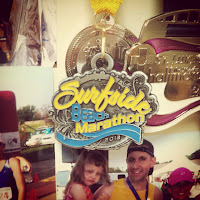 The last challenge was my own stupidity coming into the race. When I run traditionally I run before the sun comes up. This means that My shoulders and arms are lily white. I ran this race in a tank top. On top of that I utilized no sunscreen. The first half of the race we had a great amount of crowd cover. On the second half there was no cloud cover. With the sun beaming off the water and onto my arm I burned like a pig basted in butter.

I ran this race for the challenge of it. I ran it because I wanted my final race of the season to push me. The sandy clay was an expectation. I was completely surprised by my other two challenges.
There were a few odd moments in the race. I ran with Marathon Man, an Australian who wears a superman costume attempting to set the world record for most races in one calendar year, 160. I also ran behind for a good portion of the race a Pomeranian who ran the ENTIRE marathon along with her owner who escorted the super pooch. 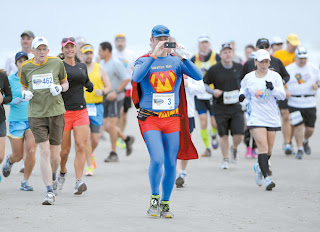 Overall I loved this race. The volunteers were awesome. The size of the race was perfect. I am used to 20,000+ races. I don’t think there were more than 200 people running with me. Why was this nice? You didn’t have to duck and dodge other runners, and there were enough so that you didn’t feel alone. There was little crowd to speak of, but a few friends sat beach side handing out bananas, oranges and other goodies.

In the end I set a personal record in this race.

I would run this race again. It was well organized, gave me what I wanted- a safe peaceful 26.2 mile run next to the ocean. As for celebration, what would anyone do to celebrate 26.2 hot and exhausting miles next to an ocean? Jump in. 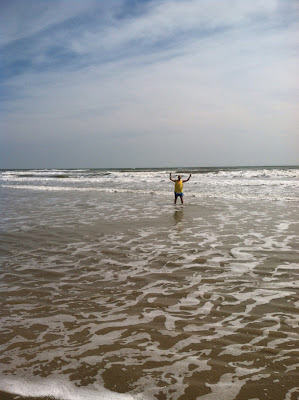